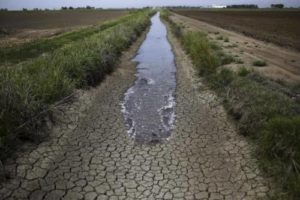 Sonoma County Supervisor James Gore, whose district encompasses more Russian River stream miles than any other county supervisor, has been strongly involved in developing the county’s response to the Water Board regulations and was the only supervisor to attend any of the state’s so-called “community meetings.”

“I applaud the winegrowers for stepping up,” he said in an interview. “I think they saw the writing on the wall. They knew they weren’t going to continue to be exempt from this sort of regulation for long, and there are also winegrowers already doing good things in those watersheds who wanted to tell their stories.”

Initially, state and federal officials who crafted the regulation said they preferred cutting off “superfluous” uses as a first step.  “Our target is not irrigation that provides an economic benefit,”  State Water Resources Control Board member Dorene D’Adamo of Stanislaus said in an interview.  D’Adamo has been the five-member Water Board’s point person for developing the regulations and was appointed by Gov. Jerry Brown as the Board’s “agricultural representative.”

Many residents counter that the irrigation season is almost over now, and that there is no way of monitoring the vineyards’ compliance with the voluntary cutback because their water use has never been metered, so the voluntary cutbacks are meaningless.  Moreover, these residents’ passionate response to the regulation did not emerge in a vacuum.  Rather, it tapped a deep well of resentment regarding the long-standing preferential treatment they say state, county, and even federal officials have accorded the powerful, multi-billion dollar regional wine industry.

A River Ran Through It

As California lurches through its fourth year of an unprecedented drought, it is no surprise that long-simmering Russian River water conflicts have come to the forefront.  At the center of this struggle are salmon and trout, whose epic life journeys play out on a scale akin to Homer’s Odysseus.

Historically, the Russian River has been known for its runs of three different salmonids: coho salmon (which are federally listed as “endangered”) and chinook salmon and steelhead trout (which are “threatened”).  All three fish are born in local creeks, or in the river itself, migrate to the ocean as they near adulthood, and finally return to their natal streams to spawn and die.

As a growing body of scientific evidence indicates, salmon are crucial to the health of aquatic ecosystems, and their carcasses provide an enormous quantity of marine nutrients that can fertilize vegetation throughout a watershed.  Much of the historic abundance of Pacific Northwest forests is traceable to the region’s historic salmon runs.

The mountains of Sonoma County are veined with streams that historically provide some of the Pacific Coast’s finest steelhead and coho spawning grounds and rearing nurseries.  But the four horsemen of fisheries collapse — habitat degradation, dams, weakening of the genetic pool through the use of hatcheries and over-fishing — have taken an enormous toll. The destruction of ancient forests, instream gravel mining, and the construction of Warm Spring and Coyote Valley dams, and widespread agricultural development along waterways are among the main historical culprits.  Overall, says long-time National Marine Fisheries Service biologist David Hines, the river has devolved into “a basket case.”

“Some of the coastal streams in Mendocino County and further north have stronger fish populations because, even with the history of over-logging, the land hasn’t sustained as much damage,” Hines says.  “In the Russian and San Lorenzo [in Santa Cruz County] rivers, especially, much more of the habitat is simply gone.”

According to Fred Euphrat, a Santa Rosa Junior College forestry instructor who holds a doctorate in watershed management, the wine industry’s extraordinary expansion throughout the Russian River watershed in the last 40 years has been a major cause of the watershed’s enormous trouble.

“There’s been massive habitat destruction, habitat fragmentation, alteration of land, and drainage water that delivers sediment to streams,” he notes.

The vast majority of regional vineyards are irrigated.  Many use water from wells, an unknown proportion of which are hydrologically connected to streamflow.  Others pump water directly from streams, creeks, and the river itself.

Most of the vineyards in the Russian River’s lowlands are prone to frost damage.  In spring, grape vines emerge from their winter dormancy with new vegetative growth that sprouts from buds established in the previous growing season. Frost can damage this new tissue and significantly affect the subsequent grape yields—and wine sales. Growers have increasingly sprayed water, via overhead sprinklers, on the vines to form a protective layer of ice over the new growth.

The amount of water that this practice requires, as long-time Russian River grape-grower Rodney Strong noted in a 1993 interview with the University of California, Berkeley Regional Oral History Office, is “horrendous” — typically, 50 to 55 gallons per minute, per acre. In 2005, University of California biologists documented up to 97 percent stream flow reductions overnight due to frost protection activities in Mayacama Creek, one of the Russian River’s five largest tributaries.

Frost protection pumping in April 2008 led to dewatering on a scale perhaps unprecedented in the Russian River’s history. On several frigid mornings, winegrape growers diverted more than 30 percent of the river’s flow in Mendocino County alone, as measured at the Hopland US Geological Service gauge. The National Marine Fisheries Service estimated that 25,872 steelhead trout died as a result of frost protection pumping in the upper Russian on a single day: April 20, 2008.

In response, the state water board moved to establish regulations on frost protection pumping, albeit with an industry-friendly goal of “minimizing the impact of regulation on the use of water for purposes of frost protection,” according to a water board environmental impact report.  The wine industry responded with an intensive lobbying campaign, punctuated by efforts from U.S. Rep. Mike Thompson of Napa – co-founder of the Congressional Wine Caucus – to forestall the regulations and question their scientific basis.

Close observers of county water politics say that such episodes have cowed regulators, since the wine industry wields considerable political muscle.  Data I helped compile from California’s Secretary of State showed that the California Association of Winegrape Growers and the San Francisco-based Wine Institute were two of the top five spenders among agribusiness organizations on lobbying California politicians in 2009 and 2010, when the frost protection regulations were emerging.

“Regulators are under a lot of pressure to treat the industry with kids gloves,” says former Petaluma City Councilmember David Keller, who now chairs the nonprofit Sonoma County Conservation Action. “In the arena where the state water board has jurisdiction, they’ve failed to strongly protect the public trust, although not completely. And the county has been missing in action on a lot of important issues.”

During the dry months, the Sonoma County Water Agency releases water from the Lake Mendocino and Lake Sonoma reservoirs (with much of the former consisting of water diverted from the Eel River) to ensure they meet the minimum stream flow in the river mandated by the state.  In part, these minimum flows are designed to ensure fish survival.

The water agency supplies this water to the cities within the Russian River watershed such as Santa Rosa, but also shunts these liquid resources across the Petaluma Gap via pipes and valves to Petaluma and the water-starved towns of Northern Marin County, which lie outside the Russian drainage. This year, the agency has been under a requirement to reduce its diversions from the river by 25 percent in keeping with Gov. Brown’s emergency drought order.

This requirement does not extend to vineyards.  Even if it did, there are little means to monitor the wine industry’s water use – unlike that of municipal residents – due to a lack of metering.

“We don’t have a countywide breakdown of water use for residences and agriculture,” said water agency spokeswoman Ann Dubay.

Having lived in the Russian River watershed for several years, I’ve been fascinated by the idea that Hopland and Ukiah grape growers had the capacity to reduce the Russian River’s flow by as much as 37 percent during an extraordinary 2008 frost protection “event” – to borrow growers’ jargon.  On July 15, two photographers and I set out on kayaks to document what these pumps actually look like from the perspective of the river.

Our 12-mile trip spanned only about 11 percent of the 110-mile river artery.  Still, what we encountered was visually staggering.  The most immediate problem we noticed on our trip is the extent to which river banks are eroding.  By trapping sediment, dams force a constipated river to replace its sediment supply by eroding its bed and banks.  Lake Mendocino has caused so much erosion that the river channel has dropped by as many as 30 feet in some areas.

The number and size of the river’s many diversion pumps are just as staggering. We captured photos of 27 diversion pipes that, as a conservative estimate, ranged from 8 to 24 inches in diameter.  All were attached to intake pumps submerged in the river channel.  In several cases, part of the river channel had been excavated – with heavy machinery, no doubt – behind small rockwall dams to allow more water to collect at the pump intakes.  We also found a handful of artificial channels that led straight to growers’ pumps.  Two of the pumps’ generators were running in the afternoon.

Section 1600 of California Fish and Game Code requires a permit for “excavating material from channels to install and submerge a pump intake,” according to a 2010 Fish and Game memo.  Department of Fish and Wildlife Environmental Scientist Wesley Stokes, who manages stream alteration permits on the upper Russian River, did not respond to requests for information about whether the growers’ dams and channels are permitted.  According to Chris Carr of the State Water Board’s Division of Water Rights, these dams “do not fit the jurisdictional requirements of the California State Water Code.”

Most, if not all, of the pumps appear to conform with the legal requirements of the state’s water rights system. And that system requires no meters nor any special drought provisions for Russian River grape growers, other than those in the four Sonoma County creeks.  Along with residents, the Water Board is now asking growers in those four areas to file monthly reports on their water use.