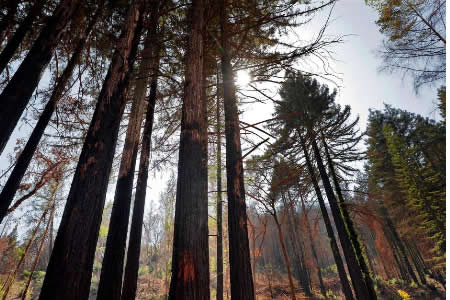 More than 228,000 acres of private timber have been cut down since 2009, by owners using emergency timber harvest permits issued by the California Department of Forestry and Fire Protection, or Cal Fire. The permits exempt landowners who have been subjected to catastrophic events, like fires, from the California Environmental Quality Act’s rigorous timber harvest review process that commercial loggers face.

They allow property owners to remove trees deemed by licensed foresters to be dead or dying, and to sell the timber.

That is what happened with a 160-acre Girl Scout Camp called the Cove, which burned to the ground when the Nuns Fire raged over Mount Veeder in Napa County in fall 2017, destroying the forest and 110 homes.

Cahill plans to reforest the hilltop with redwood saplings. That puts him in company with about a third of smaller landowners who do raise the money necessary to replant, meaning a great many of the tens of thousands of acres of trees that are cut down every year after fires are never replaced, Stewart said.