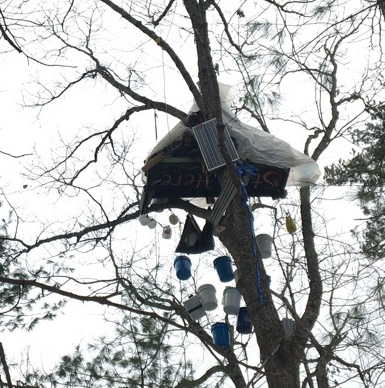 For almost five months, Phillip Flagg has been living in a chestnut oak tree 50 feet above the ground. His home is a four-by-eight sheet of plywood, a little larger than a typical dining room table, that is lashed to the oak’s boughs. Since going aloft on October 12, he has not set foot on the ground.

Below him there’s small group of about a dozen scrupulously anonymous young people who take care of Flagg’s basic human needs. They’re all here to halt the construction of a natural gas pipeline in rural Elliston, in the Virginia highlands near Roanoke. For many of them, organizing, staffing, and supporting long-term eco-protests like this is as a way of life.

Unlike his campmates, Flagg, a 24-year-­old native of Austin, Texas, doesn’t mind revealing his identity. Before Yellow Finch, as this particular tree-sitting exercise is called, he participated in two other “action camps.” He was also at Standing Rock, the much-publicized protests that erupted in 2016 in an effort to stop the construction of the Dakota Access Pipeline. But that doesn’t really count, he insists: “Everyone was at Standing Rock.”