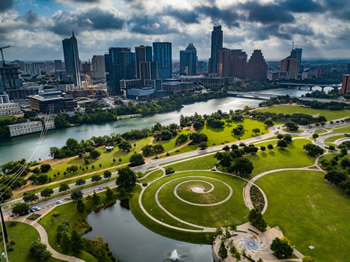 Extreme weather events, like hurricanes and droughts, cost the U.S. billions of dollars every year. The magnitude and frequency of these events is only intensifying in the face of climate change. The 2017 hurricane season was one of the most expensive in history, causing more than $200 billion in damage nationwide.

As climate disruption escalates and wreaks more havoc, so too do the number and type of legal claims seeking compensation for harm. With increasingly sophisticated weather modeling, state and federal courts are seeing an uptick in the number of cases alleging public entities (like a city or a water reclamation district) and private entities (like engineers and architects) negligently failed to prepare for known climate risks. This increased legal liability could become an important lever in compelling action on climate change.

Public and private decision makers are starting to take notice of the increasing financial and safety risks associated with climate change. In 2017, the credit rating agency Moody’s Corporation warned cities that climate change would be incorporated into its credit ratings for state and local bonds and that failure to address climate-related risks could result in a downgrade. Also in 2017, the global Task Force on Climate-related Financial Disclosures developed a recommended set of voluntary climate-related financial disclosures to assist investors, lenders, and insurance underwriters in understanding material risks posed by climate change.

But these warnings and voluntary recommendations have not resulted in the significant adoption of adaptation practices necessary to prepare for the known impacts of climate change. Rather, the majority of our regulatory, planning, and land use decisions are still based on backward-looking climate data and outdated science. That is, few cities or states require consideration of forward-looking climate science in decisions around new development, siting of critical infrastructure and hazardous facilities, and other crucial planning choices.

This failure to incorporate readily available and increasingly sophisticated climate science (e.g., projected sea level rise or storm surge) into design and siting decisions unacceptably exacerbates the risks of climate change – particularly for socially and economically vulnerable populations that are most at risk.

Litigation has long been recognized as a tool for compelling change in individual behaviors and industry standards, often serving as a stopgap where existing government regulations are inadequate. For example, litigation against tobacco companies helped raise awareness about the health impacts from smoking and played a part in spurring stricter regulations on cigarette manufacturing and marketing.

In the climate change context, we’re seeing an evolution of different legal strategies being employed to affect changed behavior and standards. Some plaintiffs have attempted to hold big greenhouse gas emitters like oil and gas companies accountable for contributing to the harms of climate change. But these suits have been largely unsuccessful to date. This is because causation is much more difficult to demonstrate than in the tobacco cases, and plaintiffs face potential preemption challenges due to the Environmental Protection Agency’s authority to regulate greenhouse gas emissions under the federal Clean Air Act.

Given these barriers, we are now seeing an increasing trend in cases seeking to hold public and private decision makers accountable for failing to adapt to foreseeable climate risks. For instance, in 2013, catastrophic flooding in Chicago resulted in millions of dollars in property damage. In 2014 Farmers Insurance Company filed a landmark class action lawsuit against the Water Reclamation District for greater Chicago for its failure to adequately prepare the city’s stormwater infrastructure for foreseeable extreme heavy rains due to climate change.