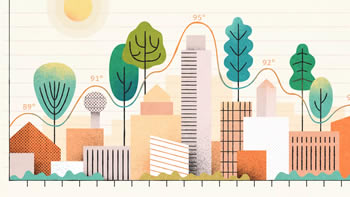 In Dallas’s hottest summer days, Matt Grubisich would dispatch his colleagues at the Texas Trees Foundation to take manual air temperature readings across the city. “You think the number to go by is the weather station out at the airport,” he says, pointing to Dallas’s Love Field, five miles northwest of the city center. “But then we’d go to a parking lot downtown where it was 6 degrees warmer.”

As the director of operations and urban forestry for the Texas Trees Foundation, Grubisich was trying to demonstrate that Dallas needed to make major design changes to fortify itself against epic heat waves. “It’s easy to explain to people why they park under a tree when they drive to the grocery store,” he says. Getting local leaders and the population at large to take action to bring more trees to the city was a tougher sell.

Thanks to the city’s 2015 effort to map its urban forest, Grubisich and his team already knew that the city’s trees were not evenly distributed. Almost half of Dallas’s trees were located within the Great Trinity Forest, a 6,000-acre nature preserve. That didn’t leave a lot of trees for the rest of the city, where some neighborhoods only had tree canopy over 10 percent of their communities.