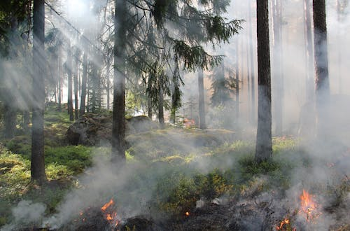 Red Emerson is the largest timber owner in California with huge holdings in the Sierra. He also has many politicians in his pocket.  And it is traditional for his company Sierra Pacific to hold a seat on the California Board of Forestry which makes the logging rules! … R. Coates

From humble beginnings traipsing through California’s vast forests with his dad to salvaging wood from forest fires, Red Emmerson has built a logging empire by being cheaper and more aggressive than his rivals.

One of the largest fires to burn in California’s Sierra Nevada mountain range, the Rim Fire tore through 257,000 acres on the edge of Yosemite National Park in 2013. Not long after firefighters doused the flames, a fleet of bulldozers and trucks arrived, sent by billionaire Archie Aldis “Red” Emmerson. Workers began ripping up the trees even as the brush nearby was still smoldering.

Nicknamed “Red” as a teen for his hair color, Emmerson is happy to reminisce about the many fires from which his Sierra Pacific Industries has profited. Wearing jeans held up by a belt buckle emblazoned with the insignia he brands on his ranch’s cattle, the feisty tycoon, who runs the business with his two sons, George, 61, and Mark, 58, makes more money from logging after forest fires than any person in America. When the government sells contracts to cut down trees after fires in national forests—a controversial practice known as post-fire salvage logging—Emmerson buys in at a steep discount, often paying one half to one fourth the price for traditional wood. Sierra Pacific then turns the usable lumber (about 90%) into boards and other wood products to sell to homebuilders and lumber retailers like Home Depot, Menards and Lowe’s.