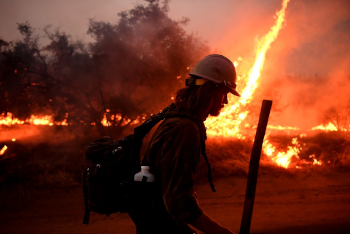 My community of Big Bear City, in the mountains east of Los Angeles, had a tense week recently. For a few nerve-racking days, the El Dorado fire, which has burned more than 20,000 acres in and around the San Bernardino National Forest, threatened to move our way.

The fire had seen little movement in the previous days, despite the fact that it was burning in dense forests with many dead trees and downed logs. Weather conditions had been cool and calm. Then things changed, and quickly. The weather shifted to hot, dry and windy. Right away, the El Dorado fire began spreading much more rapidly, toward Big Bear. We were notified to prepare for potential evacuation. Several days later, temperatures cooled again, winds died down and fire activity calmed.

Scenarios like this are playing out across the western United States, especially in California and Oregon. Many homes have been lost and, tragically, at least 30 lives too. Numerous communities have been forced to evacuate, displacing thousands of families. People are scared and looking for answers.