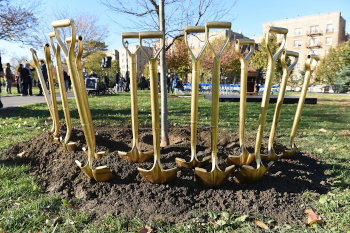 Cities across the U.S. are pledging to plant trees and restore urban forests to combat climate change and cool off disadvantaged communities.

As the U.S. grapples with natural disasters and racial injustice, one coalition of U.S. cities, companies and nonprofits sees a way to make an impact on both fronts: trees.

Specifically, they committed to planting and restoring 855 million of them by 2030 as part of the Trillion Trees Initiative, a global push to encourage reforestation to capture carbon and slow the effects of global heating. Announced on Thursday, it’s the first nationwide pledge to the program, and additionally noteworthy because the U.S. group — which includes Microsoft Corp. and Mastercard Inc. — will focus on urban plantings as means of improving air quality in communities that have been disproportionately affected by pollution and climate change.

“We’re passionate about urban forestry and the goal of tree equity,” says Jad Daley, president and chief executive officer of American Forests, the longtime conservation group that’s helped organize the pledge. “It’s not just about more trees in cities. If you show me a map of tree cover in any city, you’re showing me a map of race and income levels. We see this as nothing less than a moral imperative.”