Forest Unlimited received a grant from the Northern California Grassroots Fund to do a study on acres of trees removed for vineyards. This was done for the years 2007 to 2013.

The report Ground Truth Publication is in a pdf format and can be printed out.

In this photo of the remains of a section of the Paradise wildfire, note the number of mature trees standing around and among the all the burned houses. 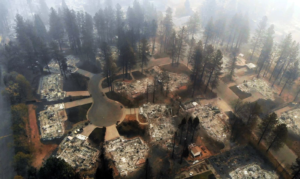 View this video to find out how to protect your home from wildfire:https://www.youtube.com/watch?v=vL_syp1ZScM&feature=youtu.be&fbclid=IwAR0vuvq2N69BYuRFruiIUnNnI5RyaVB2_ss34nJ105bXILI42NbyGXBTWfg

Please sign the petition below that will urge the supervisors to update their very weak, current tree ordinance to one that would be much stronger and not have blanket exemptions for some industry.

This THP that would log in the floodplain of the Gualala River. CAL FIRE approved this Logging Plan on March 30, 2018.  Dogwood contains the largest tracts of mature redwoods in floodplains, beginning at the boundary of Gualala Point Regional Park’s campground and extending up over 5 miles of the river.

These floodplains are wholly special riparian habitats: they are part of the river, which naturally occupies the floodplain when it flows over its banks. It’s a potent natural sediment trap, or “sink” for the silt and clay that runs off of the eroding slopes and landslides above it. When its vegetation is flattened, the floodplain loses its capacity to trap sediment. This plan in effect logs the river itself, as the river includes its floodplains.

The Gualala River’s floodplain supports extensive seasonal wetlands. Salmon and steelhead feed and fatten on the floodplain, including its wetlands, during those special flooding events such as we had in early April.

Among the environmental reasons and legal basis for the lawsuit to protect the Gualala River are:

• GRT dismissed the existence of seasonal wetlands in the floodplains, which is not credible.

• GRT disregarded CAL FIRE’s own scientific guidance on how to assess riparian redwood logging plans. They didn’t even assess the effects of winter 2017 flooding of the floodplain on the part of Dogwood they did harvest (lower Buckeye Creek) or compare it with unharvested areas to validate their predictions of how benign their floodplain logging plan is. If they were serious about environmental protection, they would have at least monitored to verify their predictions and assurances. They didn’t.

• GRT didn’t assess the endangered red-legged frog adult impacts during the non-breeding season, when they move away from breeding ponds and into floodplains to feed at night and hide out under cover by day. They treated frogs impacts as though they were in a hot, arid inland climate (inactive or close to ponds in the dry season) rather than on the more humid coast (where they move overland in foggy, cool weather and at night). And the plan still says the nearest known occurrences of red-legged frogs are 21 miles away, contradicting added information that they are present in the plan area! Careless and confusing contradictions show how sloppy the RPF and CALFIRE are in preparing a revised plan, even after losing last year’s CEQA lawsuit to FoGR and their allies.

• GRT didn’t even do a cumulative IMPACT analysis of the floodplain logging. They just tallied up cumulative PROJECTS: total plan acreages of different silvicultural treatments in other logging plans, and didn’t even distinguish acreages of floodplain from slopes, or wetlands from non-wetlands. So, there was no assessment of the cumulative environmental effects of those projects on fish, wildlife, floodplains, wetlands, plants, etc.

• The THP acknowledges that the river “regularly floods its banks,” but omits any reference to the special salmonid feeding habitat it provides when it does, or the impacts of disturbing the floodplain soils and habitat with skid road use, logging, and hauling. That’s why there are special scientific guidelines and rules for assessing logging plans that venture into floodplains. And GRT and CALFIRE either disregards them or asks for “exceptions” to the rules. We refuse to allow this.

• GRT and CAL FIRE really didn’t fix anything in the old THP. They made minor technical amendments that still dismiss the public’s legitimate concerns.

FoGR and their allies will continue their fight against this egregious logging plan, which would harm the river, its floodplain, and the wildlife that live in or beside it. Logging in the floodplain is a terrible idea that needs to be stopped before it inflicts damage on the Gualala River.
The importance of this area is demonstrated by Sonoma County plans to make it centerpiece of River Park as far back as 1950s, when timber and salmon fishing were still booming.
Logging of Dogwood is set to start on May 15, 2018. FoGR and their allies will be in court before that date. Please help us in our fight by donating to Friends of Gualala River. http://gualalariver.org/

Friends of Gualala River (FoGR) is a non-profit association dedicated to protecting the Gualala River watershed and the species that rely…
http://gualalariver.org

March 2018:  UPDATE:  CALFIRE HAS WITHDRAWN THIS PLAN FOR NOW!  The landowner lost permission to use a neighbor’s property making the plan infeasible.  The battle is not over because it could be resubmitted at any time.

June 19, 2017, Healdsburg, CA — As wild Coho salmon have disappeared in every tributary of the Russian River watershed over the past decades, Felta Creek remains the rare exception. Even in the low fish years of 2006 and 2008, endangered wild Coho salmon survived in the shady pools of this boulder strewn west county stream. This spring, UC researchers discovered multiple spawning beds, or “redds,” in the creek’s gravel bars. But the fate of this fragile habitat now lies in the hands of an absentee landowner with an aggressive logging agenda.

In late 2015, Humboldt County resident Ken Bareilles bought a 160-acre Timberland Production Zone property that includes a core section of Felta Creek’s headwaters. Bareilles, a logger and lawyer, filed a Timber Harvest Plan with CalFire (formerly the California Department of Forestry). Barring some act of intervention, the plan — THP 1-17-017 SON (Fox Meadows) — is on its way to approval.

The fact that Bareilles’ plan progressed this far this quickly has alarmed both professionals and community members. Of the 160-acre property, registered forester Randy Jacobszoon’s plan calls for logging on 146 acres. Of that, 130 acres are slated for Group Selection and Transition Harvest — essentially, aggressive multi-acre patch cuts. According to the California Geological Survey, “site slopes range from 10 to 80 percent gradients … geologic mapping identifies dormant and active deep-seated landslides as underlying the plan area.” How will heavy equipment, logging and hauling during the winter affect a slide-prone landscape?

“I have reviewed logging plans in Sonoma County for over 20 years, and this is one of the worst,” says Larry Hanson, president of Forest Unlimited. “First, there is the delicate and biologically important stream that runs through it. Second, there are critical safety issues related to school children and local residents who use this one-lane dirt road to get in and out of their homes. Finally, there are climate impacts.”

NOAA and the National Marine Fisheries Service, recognizing the critical need to protect this watershed, recommended a more sustainable approach to limit erosion and preserve more of the forest canopy. In a public meeting on Thursday June 15, 2017, Anthony Lukacic, the CalFire official in charge of recommending the proposed timber harvest plan for approval, said one of NOAA/NMFS’s recommendations made it into the final plan. He considered but rejected others, deciding that CalFire’s Forest Practice Rules would suffice if adequately implemented.

According to Russian Riverkeeper, the stakes couldn’t be higher. “Losing one of the single best juvenile Coho Salmon habitats on Felta Creek that get baby Coho through the hot summer months would be a massive blow,” says Russian Riverkeeper president Don McEnhill.

Community members and county officials are alarmed by the scope of the proposed hauling operation. The landowner has an easement to use Felta Creek Road, a private one-lane gravel road that winds above Felta Creek. Four full-time families reside there amidst some grape cultivation. The use and maintenance of this rural road have been sufficient to balance light traffic and the health of the fishery. But Felta Creek Road has never been an industrial logging haul road.

Community members have been told to expect 13 logging trucks per day in 6 separate shifts. Two wooden bridges, privately installed and maintained, have not been inspected to see if they can withstand this kind of impact. There are sharp turns around big trees, few turnouts, two waterfall crossings, a mile-plus section of road susceptible to sedimentation of the creek. At the bottom is Westside Elementary School, with over 170 students, some who walk down Felta Creek Road to attend classes. Most students and families use Felta Road, a publicly maintained county road where school traffic is already congested.

No traffic impact or safety studies were completed as part of the timber harvest plan. At the June 15 public meeting, CalFire’s Lukacic asserted that the hauling operation was a civil matter. A certified engineer’s letter questioning the suitability of bridges, numerous concerns about sedimentation of the creek, fire and public safety issues and threats of litigation have all been filed during the public comment period, set to close on June 26.

What could all this mean for the last recognized habitat for wild coho salmon in the entire Russian River watershed? One local timber operator who reviewed the plan predicted: “this is going to be ugly.”

According to one official at the CalFire meeting, agencies were concerned about Ken Bareilles’ record of land abuse: a cleanup and abatement order with the Regional Water Board in 2002, as well as CalFire violations. A March 12, 2012 California Department of Fish and Wildlife press release[1] reported what inspectors saw at a Ken Bareilles-owned Humboldt property:

“… soil stock piled next to or in the stream channels, removal of riparian vegetation and poorly installed stream crossings. DFG then filed a formal complaint against Bareilles and he was convicted.

During a storm in January 2012, the team then returned and witnessed sediment entering streams and flowing downstream toward Redwood Creek during the salmon and trout spawning and rearing season. As the rain continued, video was taken of an estimated 10 cubic yards of sediment becoming saturated and flowing like lava into one of four affected streams on site.”

Bareilles’ THP zoned property also happens to be for sale. This means a buyer or coalition of buyers could potentially prevent logging in this critical watershed.

“There has to be a better way,” says Felta Creek Road resident Dan Imhoff. “We have to protect all the healthy habitats that remain in this County.” Imhoff helped start the organization, Friends of Felta Creek, to mount a community response and conservation outcome to the proposed timber harvest plan.

FOLLOW-UP AND HOW YOU CAN HELP

Good news: The THP has been sent back by the director for major revisions. See the accompanying article on this. However, it may come back with changes that still don’t fix the larger impacts.